Ogre Battle Saga Wiki
Register
Don't have an account?
Sign In
Advertisement
in: Let Us Cling Together - Races, Races 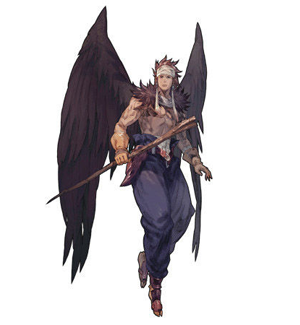 The Winged Folk are a race common throughout the lands of Xytegenia and Galicia. They have the appearance of a human with a pair of large feathered wings sprouting from their backs. Adept at both melee and ranged combat, and often capable of using magic, they are a powerful race indeed.

Apart from the great wings that allow them to soar the skies, the Winged Folk appear to be ordinary humans. The skin of the Winged Folk may vary in shades of pale to dark brown. Their hair, which is typically worn long and unkempt, may be brown, red, or blonde.

The feathers of their wings range from a pale gray or white to gold, brown, and red, or even a dark green. Feather color is a distinguishing feature among the various populations of Winged Folk. The Lodissian Sheen Cocteau had gold-colored wings, while his Palatinean counterparts typically sported reddish-brown feathers. Members of other races were often able to make this distinction as well; Xapan Illudas singled out Canopus Wolph as a foreigner because his feathers were not the pale colors found among the Winged Folk of Valeria.

The lifespan of the Winged Folk is thrice that of humans, and they begin to show the physical signs of aging at a much slower rate. Canopus, although 48 years of age, has the appearance of a young man in the prime of life. Sheen appears as a man of perhaps 30, but is older than all but the most venerable among humans.

Due to this extended lifespan, most of the Wing Folk are wise and well learned, though the many young males tend to be brash and violent. Young Hawkmen eager for a fight often become mercenaries or join human armies, embroiling themselves in the wars of men. Although many young Winged Folk will outgrow their impetuous ways as they mature, others will often continue their careers as warriors for many years. These more experienced Hawkmen will thus follow the paths of either the Vartans or the Ravens.

Vartans, also known as Eagle Men, value order, law and justice. They are often adept at wielding thunder and healing magics. Many of these people go on to fight for honorable causes, and are more than willing to give their lives in pursuit of justice.

The Raven men are bloodthirsty group of Winged Folk steeped in darkness and evil. They are capable of fire magics and other dark arts. Most of these go on to become bandits, thieves, cutthroats, and mercenaries.