"I have no love of war. But I'd sooner die on my feet than on my knees."
— Vyce Bozeck

Vyce Bozeck is a major character in Tactics Ogre: Let Us Cling Together. His role in the story, and whether he's playable or not, depend on the player's choice at the end of Chapter 1.

Childhood friend of Denam and Catiua. Together, they hold a vendetta against Lanselot Tartaros and the Dark Knights Loslorien, who raided and massacred their hometown of Golyat for unknown reasons. They later join the Resistance to fight in the war.

An arrogant, self-reliable person and a boastful person when it comes to his allies.

Together with Denam he rescued Duke Ronwey and joined the Walister Resistance. He later broke his ties with the Resistance after strongly opposing the massacre of innocent Walister at Balmamusa. He went on to form the New Walister Alliance to champion Walister self-rule and break the nobility's grip on power, earning much favor from his people.

He eventually reconciled with the Resistance when Denam took up its leadership. His might in arms served the Order of _____ well, helping bring the war to an end.

Vyce was raised in Golyat by his father, who was an abusive alcoholic. When he was very young, he became acquainted with Denam and Caitua, after Abuna Prancet moved to Golyat with his family. The three children grew up close friends, but Vyce did harbor a complex over the privileges Denam had, which were denied to him.

When the Dark Knights attacked Golyat, Vyce witnessed his father slain by the Dark Knight Barbas. Despite their fractious relationship, father and son called out for each other in his final moments. Vyce had to be restrained by Denam, lest he be killed himself.

A year later, the three youths, now orphaned, resolve to join the Walister's fight against the Galgastani and Bakram. Vyce, the most eager and proactive of the three, takes on a provisional leadership role in the group. With the help of Knights from Xenobia, they manage to liberate the leader of the Walister Resistance, Duke Ronwey, from his imprisonment by the Galgastani. The Duke formally welcomes them into the Resistance as knights, although Denam is granted a higher position of command than Vyce.

Vyce took part in the operation to liberate the Walister slave labor town of Balmamusa. When the townspeople refused to join the fight, Vyce angrily berated them for their inaction. The knight Leonar then revealed the Duke's contingency orders - to massacre the townspeople and make it look like a Galgastani genocide.

In the Lawful Route[]

Disgusted by the Duke's orders and Denam's compliance at Balmamusa, Vyce abandons the Resistance. He forms the New Walister Alliance, spreading the truth of the Balmamusa massacre and standing in opposition to the Duke and the Hierophant. His alliance is bolstered by Walister followers Arycelle Darta and Gousin Blum amongst others, and they engage in minor skirmishes with Denam's forces.

After Denam becomes new leader of the Resistance in a coup that claims the Duke and Leonar - the lead culprits of the massacre - Vyce realigns his forces with them. Though he cannot forgive Denam for his actions, he pushes his feelings aside, ordering his subordinates to do the same.

Denam and Vyce prove to be an effective team of military command. Through a combination of Vyce's strategy and Denam's battlefield prowess, they manage to route the much larger Galgastani forces. Vyce remains with the Resistance through their subsequent battles against the Bakram and Loslorien, coming face to face with his father's killer Barbas, and emerging victorious.

When Denam leaves Valeria after the war, Vyce remains in Heim. The trust between him and Denam now rebuilt, he pledges to protect Catiua in his absence.

In the Chaotic Route[]

Vyce follows the Duke's order to massacre the Balmamusans, openly disdaining them for not taking up arms for the Resistance. When Denam, Catiua, and Ravness protest, his indignation spills over towards them. He mortally wounds Ravness with a crossbow bolt to the stomach. From then onward, his childhood friends are traitors to his eyes.

The Duke rewards Vyce's loyalty by making him leader of the Third Spear. He continues to hunt down the fugitive Denam and his followers, clashing with them several times. As his status and confidence grows, so too does his scheming. He secretly conspires with Regent Brantyn of the Bakram in an ploy that would eliminate the Duke and the Dark Knights. Though Vyce manages to kill the Duke, the intervention of Oz and Ozma overpower his forces before he can kill the Dark Knights' leader Lanselot Tartaros.

His plans in tatters, a terrified Vyce begs his Lodissian captors for mercy, which a disgusted Lanselot grants. However, his reprieve is short-lived. Brantyn deflects all responsibility for the incident onto Vyce, and he is hanged in Heim.

In the PSP version, Vyce is reanimated by the necromancer Nybeth. Denam is forced to fight the undead Vyce, as part of the sidequest to recruit Cressida. He is killed once more, releasing his soul for good.

In the Neutral Route[]

Vyce leaves the Walister Resistance acrimoniously after Sir Leonar reconciles with Denam following a confrontation at Almorica Castle. The Duke labels him an enemy for his desertion, and a bounty is placed on his head.

Vindictive to the point of madness, and with nothing left to lose, Vyce plots one final act of retribution. During the operation to retake Rhime, he ambushes the Resistance headquarters and takes the Duke hostage. With nowhere to run, he slays the Duke, but is immediately cut down by Resistance soldiers.

Initially, Vyce is a cocky, impulsive, arrogant and independent person. He's openly rude to other people, even his allies, and this is easily seen in his interactions with Catiua and the Xenobians during Chapter 1. Despite this, he also shows shades of being the most clever and politically savvy of the Golyat trio.

At the end of said chapter, whatever route the player chooses to pursue determines Vyce's personality and goals for the rest of the story.

In the Lawful route, Vyce remains steadfast in his principles of Walister independence. When he sees how the even the Duke would exploit their people, he abandons the Resistance in disgust. While he forms a personal rivalry with Denam during this time, they stop short of killing each other. As the state of the war shifts, he eventually overcomes his grievances and sees the need for truce. For this route, Vyce grows into a self-driven, honorable man capable of sacrificing himself and putting aside past grudges for the greater good.

In the Chaotic route, Vyce becomes consumed by his envy of Denam, and desires of revenge against everyone who has oppressed him in life. He openly bares his hatred for his former friend for his happier upbringing, his monopoly of Catiua's attention, and his promotion over him in the Resistance. Vyce also grows more manipulative, scheming behind the backs of his allies for his own ambitions. However, when faced with death after his over-reaching plans fall apart, he reverts to a terrified youth, in way over his head. In his last moments, he screams to an absent Denam for help, though it's not known if he regrets his actions or desperately calls for the only friend he truly had.

In the Neutral route, Vyce becomes enraged when Denam is re-admitted to the Resistance, and strikes out on his own. When a bounty is placed on his head by the Duke, he gives in to darkness completely, essentially becoming a one man terrorist threat. Fittingly, he meets a bloody end while assassinating his former lord, the Duke. He likely understood that he would not survive, but was so consumed by vengeance that he carried it out nonetheless.

Notably, Vyce is much more vulgar in the SNES/PS version than in the PSP version. This is mostly due to the change in translation.

He, along with Mirdyn, Gildas and (in the PSP version, if you didn't kill her before) Arycelle join automatically after the battle against Xaebos in Chapter 3.

He's initially available as a guest unit during Chapter 1. Since you will lose him at the end of the chapter, just leave him as a Warrior, he'll do decent damage and survive enough for the early-game.

After his recruitment during Chapter 3, Vyce will come with an unique class: Ranger. As a Ranger, Vyce proves himself an excellent damage dealer in both melee and range, with the highest DEX score of all classes, Double Attack and a good array of mobility skills like Swiftfoot II and innate Wade. His defense and magic resistance is somewhat lacking, but it's nothing than a few levels in Resistance and some tarots and food to increase RES cannot rectify.

He comes with some trained levels in 1H Swords, but he'll benefit the most from Daggers or Bows instead. If you choose Daggers, the postgame will give you great elemental daggers like the Marauder Knife, give him Augment Water with this weapon for increased damage. With Bows, his Ranger class can use the Archer exclusive Ji'ygla Bow, which can outperform dual daggers in some cases. He can also use Double Attack with Fusils, but must learn the skill from another class.

He later gains access to the Buccaneer class. On the surface it's almost identical to the Ranger class, but can be considered superior thanks to Speedstar. He also learns Fusils from this class.

In short, Vyce can easily become one of you best damage dealers as either a melee or ranged unit. When deciding on class, the ultimate difference is this: greater damage with daggers and ranged weapons and more time to train the class (as a Ranger), or Speedstar in exchange for a bit of DEX and grinding levels (as a Buccaneer).

See the pages for Ranger and Buccaneer for more information. 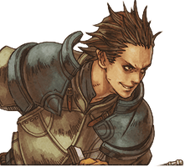 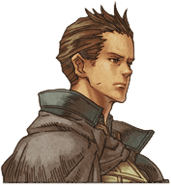