Catiua Pavel, real name Versalia Oberyth, is one of the main playable characters in Tactics Ogre: Let Us Cling Together . She is Denam's sister and the adopted daughter of Father Prancet Pavel. When Prancet vanished, Catiua provides a motherly role for her younger brother.

She follows Denam in his quest for revenge against the Dark Knights Loslorien for the destruction of Golyat, and later joins him and the Walister Resistance under Duke Ronwey, but the constant threats on her brother's life start to fill her with doubt.

Catiua Pavel. Age 19. Catiua's true name is Versalia Oberyth. She is the daughter of the Dynast-King and the Queen's handmaiden Mannaflora. Soon after her birth she was taken in by Abuna Prancet and raised in Golyat. She knew nothing of her lineage besides the fact that Prancet was not her true father.

After the Dark Knight Lanselot revealed the truth to her, Loslorien forced her to accompany them under the pretense of protection. She was later rescued by Resistance forces advancing on Barnicia Castle.

She sided with the Resistance, bringing the war to an end and reclaiming the Valerian throne. Her coronation fast approaches.

Initially, Catiua is an emotional, hard-headed, insecure and selfish young woman willing to throw the world away so that she won't live alone. For this reason, she's dependant on her relationship with Denam.

When Denam becomes more dedicated to the war, and thus more often in danger, Catiua tries to tempt him into abandoning his duties and escaping together to safety, but he refuses. She becomes increasingly desperate, and eventually devolves into believing Denam doesn't care about her at the start of Chapter 3, where she leaves his army.

When Lancelot reveals her true heritage, and that Denam isn't her blood brother, she starts following him. It's clear that, no matter what excuses she makes (such as saying that it's because the Dark Knights need her more than Denam did), she does this to try to fill her life with purpose after her previous worldview was broken. It gets to the point where she turns her blade on Denam, and becomes increasingly hysterical.

After the Dark Knights abandon her, she loses her purpose once again. If Denam doesn't calm her, she will kill herself in despair so that she won't be used or abandoned by anyone again. If Denam does calm her, she recovers her faith in him, and starts behaving more responsably and mature to befit her Princess duties, even taking the front lines of the war for the sake of Valeria.

Some player may notice a personality change between the game versions. In the SNES/PS version, Catiua is more emotional, even after taking to her Princess role. In the PSP version, she more passive-agressive, but it's mostly gone after her recruitment.

She starts the game as a guest unit, but will leave at the start of Chapter 3.

Her recruitment process as a permament unit starts during Chapter 4, after rescuing Archiereus Mreuva. He asks you "Have you the will to wage war upon her?" Answer "That I cannot do," and Catiua will appear in the Barnicia Grand Staircase battle later in the chapter. Answer "I shall do what I must," and she will not appear in the Barnicia battle.

Once you reach Barnicia Castle, the next step is not to let her die if she participates in the battle with Tartaros. If she did not appear, then that's one less thing you have to worry about. After the battle, Denam will have a conversation with Catiua inside an abandoned room in the castle. If she participated in the battle, answer her "I did only what I had to do," and "You are my sister, and I love you." If she did not appear in the battle, answer "I never abandoned you," and "I took no joy in our parting." Any other answer will result in Catiua not joining your army, for reasons that will become obvious. Catiua will permanently join you once you return to Phidoch Castle.

During her stint as a guest character, Kachua is limited to the High Priest class which functions as a cross between Cleric and Exorcist. Due to being AI controlled and unable to participate in Training Mode, Kachua's performance during Chapter 1 and 2 will be unreliable at best, wasteful at worst; it's recommended to keep her with a Heal spell only and let her focus on healing allies during her turns (her AI shows a preference towards healing Denim this way).

However, if Kachua is saved and recruited during Chapter 4, she quickly proves herself as the best mage available to the player, thanks to her exclusive class. As a Princess, Kachua gets amazing stat growths and access to every single spell type in the game, including Dragon magic (sans SnapShot for obvious reasons). While the class description touts her as a mage-warrior, her low VIT growths means she cannot resist damage very well; even then, she does much better as a pure mage, and access to global-target attack spells means that she doesn't even need to get close to enemies if properly armed.

She's easily the best user for the Starion spell, and earlier than that she may give better use to WipeOut and its counterparts regardless of elemental affinity. Even if the player considers such spells too gamebreaking, she can still use Fenril or any of the other summons much better than any other unit possibly could (by stat growths alone).

Catiua has access to three exclusive classes: Priest, Dark Priest and Princess. During her stint as a guest character, she only has access to the first, and given the early-game utility and lack of cross-class options for the Priest class, there's not much point on changing her class.

If successfully recruited during Chapter 4, the other two unique classes become available. As a Dark Priest (class unavailable in past versions) Catiua loses Divine Magic and Holy Water, but gains access to Dark Magic, limited Elemental Magic, some unique skills and excellent stats for a magic attacker.

As a Princess, Catiua can transfer skills from classes such as the Enchantress, Witch and her previous Priest (among others) to increase her skill, magic and armor options, gaining access to Draconic Magic and the powerful light-elemental Heavenly Judge (one of the very few units to do so), making her a versatile, well-rounded unit.

Overall, it's suggested to train her as a purely mage unit, whatever the build you choose for her. Her high INT and MND ensures she deals high damage with attack magic and good healing, though for the late-game it's better to focus more on attack and utility skills. As a Princess, its recommended to give her the Brynhildr sword to increase her Light-elemental damage. 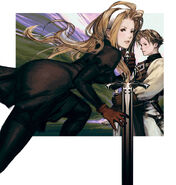 Add a photo to this gallery

Retrieved from "https://ogrebattlesaga.fandom.com/wiki/Versalia_Oberyth?oldid=22841"
Community content is available under CC-BY-SA unless otherwise noted.