Ogre Battle Saga Wiki
Register
Don't have an account?
Sign In
Advertisement
in: Nations, Let Us Cling Together

The Valerian Isles is the location where the events of Tactics Ogre: Let Us Cling Together take place. It's comprised of a group of islands long known for their political instability. The combination of the isles' smaller size relative to larger neighbors like the Holy Lodissian Empire and the fractured political climate meant that the isles were frequently under the influence of other nations and barbarian tribes during their history. 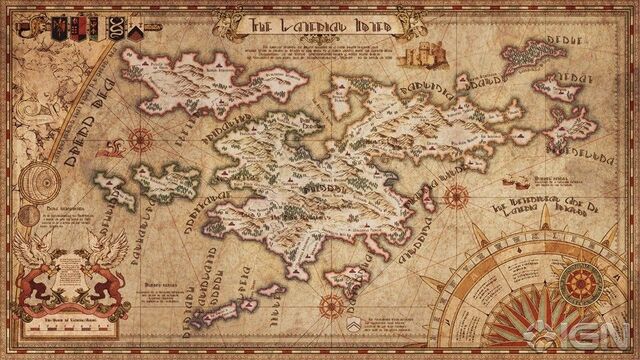 Most of Valeria's landmass is taken up by one large island, which is roughly split in half between two kingdoms. The Bakram-Valerian Kingdom controls the north-east, and the Kingdom of Galgastan the south-west. The island's third clan, the Walister, are reduced to a small province in the south under Galgastan control. Many smaller islands surround the mass, housing more remote pockets of civilization, such as Port Omish and Vasque.

Valeria seems to be in the Northern Hemisphere. The climate becomes snowy in the north, and warmer in the south.

It was originally divided by five kingdoms: Barnicia, Phidoch, Almorica, Coritanae and Brigantys. During Dorgalua's Great War the leaders of these kingdoms were deposed or killed one by one, and in the end the victorious King Dorgalua unified the isles, founding the Kingdom of Valeria and ushering it into a "Golden Age".

The victory was short-lived however, when both the prince and Queen Vernotta died and Dorgalua was presumed dead, the succession crisis resulted in the kingdom fracturing into three factions, each belonging to one of Valeria's ethnic groups: The Bakram-Valerian Kingdom led by regent Brantyn Morne, the Kingdom of Galgastan led by regent Leundar Balbatos, and the Walister Resistance led by Duke Juda Ronwey. With the fires of war rekindled, the Holy Lodissian Empire saw the chance to expand it's influence in the isles and deployed the Dark Knights Loslorien, ostensibly as mediators, to negotiate a secret alliance with Exarch Brantyn. This new war, known as the Heim Conflict, saw the rise of Denam Morne, who led his army to reunify the isles, and the reveal of Dorgalua's surviving heir Versalia Oberyth. Peace was achieved once again under Queen Versalia's rule, and the Kingdom of Valeria prospered for 1,000 years until its unification with the people of Heth.

The Valerian Isles are inhabited by three ethnic groups: The Bakram, the privileged class, consisting of noble lineages and supporters of Dorgalua; the Galgastani, the most numerous population, known for their loyalty to the Coritanae bloodline; and the Walister, a beleaguered minority group, target of discrimination from both Bakram and Galgastani alike. While previously at war with each other, Queen Versalia's rule presumably put an end to the hostilities.