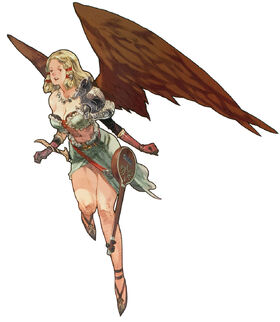 The Songstress is a special class featured in the PSP version of Tactics Ogre: Let Us Cling Together. It's mainly represented by Iuria Wolph, but can also be used by Pumpkinheads.

Not to be confused with the generic class Siren.

The Songstress class is unlocked at the same time Iuria is recruited, as the final reward for clearing CODA 1. To do this Gildas must be in the party first; it doesn't matter if he's listed as dead in the Warren Report -as it's the case in Neutral CODA- so long as he's available in the party.

First read about "The Songstress of Omish" in the Warren Report, then go to Port Omish. The following battle is virtually impossible to win, instead focus on surviving as a conversation between Denam, Gildas and Canopus develops. Each time, pick the choices than focus on peace and responsibility until Denam suggests a retreat.

After fleeing, the Pirate's Graveyard will be closed. Read the Warren Report entry "Iuria's Requiem," leave the Warren Report, then go back and read "Iuria's Secret" and the Pirate's Graveyard should be reopened. Fight your way through to the eleventh map, "Into the Darkness." Defeat the Wicce Sirene, final boss of the CODA 1, and Iuria will join you.

Besides the ones earned by recruitment, additional Marks can be bought at Deneb's Shop after CODA 1.

Despite enjoying unique perks such as the use of Songs and Instruments, it's quickly made evident that this class suffers from the same problems as the Divine Knight, being an overly-specialized support class without much else to offer.

The biggest problem of the Songstress class is that all of their skills are close-range, and all of their attacks are point-blank save for the weapon finishers, which doesn't help with their already poor defense; while Echoing Voice and Resonant Voice can help with the Songs range and duration, they sadly can't be used together. The Songs themselves are not very impressive to make the range problems worthwhile, with the exception of Ardent Conga, and even that one can be easily casted from arcana by other classes as it costs a measly 200G.

This is made even worse if the Songstress in question is a Pumpkinhead, which has a pathetic Move score that will make it incapable of keeping up with their allies.

Another detail is that Songs need reagents to cast, which wouldn't normally be a problem except for the fact that the next quest dungeons available after unlocking this class, Palace of the Dead and San Bronsa Ruins, have a marathonic duration, making it too easy to run out of reagents in the middle of the dungeon.

While this class can learn Spellcraft IV, it doesn't seem to have any particular effects on Songs, neither potency nor duration. It can be worthwhile to use in tandem with the Blood Whip for three castings of Drain Heart, or with spellcasting effects from Instruments, but that's it.

In short, the only viable reason to use this class is for the uniqueness, as it doesn't offer anything particularly useful to the party and is a liability to keep in combat.

Songstress's Marks are awarded after recruiting Iuria, afterwards extras Marks and Song reagents can be bought from Deneb's Shop.