Ravness Loxaerion is a playable character in Tactics Ogre: Let Us Cling Together. A member of the Knights of Almorica, she's a new character introduced in the PSP version.

She's only recruitable in the Lawful route, for reasons that should become immediately obvious if one choses the Chaos route.

Ravness Loxaerion. Age 23. A Walister who once served with the Knights of Almorica. She is of mixed blood, the child of a Walister father and a Galgastani mother. She was next in command to Sir Leonar, and was a close supporter of Duke Ronwey.

She turned her back on the Resistance after opposing the massacre of civilians at Balmamusa. She then fled to Galgastan to be with her mother. There she worked with enemies of the Hierophant to incite revolution in Galgastan.

Denam helped her repel Galgastani forces that pursued her after she freed the Lord of Coritanae. Seeing the true nature of the war, she returned to the Resistance to help Denam put an end to it.

Ravness is a noble young woman with a strong sense of duty and justice. She had sworn fealty to Duke Ronwey, and served as one of his swords for years, but abandoned him after his cruel decision to massacre the civilians of Balmamusa.

She serves as a foil to Leonar. While both possess noble qualities and intentions, Ravness ultimately chose righteousness over loyalty, even as it marked her a traitor.

She also shows a degree of selflessness, choosing to fight for the cause of the Galgastani opposing Hierophant Balbatos shortly after escaping her captors, despite the fact that many Galgastani despised her for her mixed blood and past as a Walister knight. There's also her more subtle acts of kindness, such as her advice to Denam during Chapter 1 and her returning to Galgastan to be with her widow mother.

Because of her lifestyle, she doesn't seem to think of herself besides her duties as a knight, as Canopus playfully points out.

Recruiting Ravness is a rather complicate, multi-step process.

First, choose to participate in the Balmamusa massacre, starting the Lawful route. In the subsequent battle, avoid killing or letting Ravness die, and she will escape once all enemies have been killed; it can be rather difficult, but you can try to guide her to the enemy and she will start targeting them instead.

During Chapter 2, read the Talk topic "Ravness Loxaerion Captured" after the Rhea Boum Aqueduct battle. Go to the Reisan Way and choose to rescue Ravness ("I cannot leave you here"), then help her survive the battle.

During Chapter 3, recruit Jeunan (see his page) and read the Talk topic "Lord of Coritanae Missing" before entering the Bahanna Highlands. Bring Jeunan to this battle and get the enemy leader, Roberval, under 70% HP to trigger a conversation between Jeunan and Denam, read the whole conversation, you'll know it's over after Jeunan says "I am sure by now that his father joins him"; Denam should say "Balbatos must fall, or they died for nothing" at the end of the battle.

After taking Coritanae in the same chapter, return to Bahanna to encounter Ravness again; help her survive this battle, and at the end she'll finally join you.

Initially, she neatly fills the niche of the Valkyrie class, joining with trained ranks in Spears and Lightning magic, and good stats all around, including high speed (only inferior to Ozma). But as explained on the Valkyrie page, the PSP version of this class has lost much of it's edge as a physical-magic attacker, relegating it to "jack-of-all-trades, master of none". Fortunately, Ravness has another option that make her truly shine on the battlefield.

Ravness is the only unit other than Gildas, Mirdyn and Ozma with access to the White Knight class. Superficially an upgrade of the generic Knight class, the White Knight has better damage potential, healing and ailment curing spells, and access to great support skills. Thanks to the adittional range of the spear and her great speed Ravness can easily stun the enemy army with Paralysis Blade and Counterattack, then retreat to heal if she takes too much damage.

A great equipment choice for Ravness in the late-game is the Culnrikolnne and Holy Lance. Since, as a White Knight, Ravness will be using Divine Magic frequently, you can benefit from the Augment Light skill for both healing spells and light-elemental damage from the weapon. Better options will be found later, but this set can be useful for a long time.

In short, Ravness benefits much more from the unique White Knight class than her original Valkyrie. She's no primary damage dealer, and she doesn't need to be, as she is more useful as a support and enemy-crippling unit, though she can be a decent attacker thanks to her range and speed.

See the pages for Valkyrie and White Knight for details. 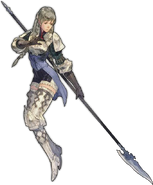 Ravness' artwork (Full body)
Add a photo to this gallery

Retrieved from "https://ogrebattlesaga.fandom.com/wiki/Ravness_Loxaerion?oldid=21116"
Community content is available under CC-BY-SA unless otherwise noted.