Quest Mode is a gameplay mode introduced in, and currently exclusive to, Tactics Ogre: The Knight of Lodis.

Quest Mode is unlocked after the fourth story battle (Formido) and accessed from the title screen. In it, the player can obtain rare items and hefty Goth rewards upon completion, but no EXP. Loading Quest Mode requires a save file that has at least one "book" (map) unlocked; of these maps, all have a fixed level and, with the only exception of Numida Chronology, also have an entry fee. Every battle has one unique (generic class) leader and randomized lackeys, and only five of the player's units can be deployed.

Before entering any map, the player can set the victory condition of the battles (kill leader or kill all) and the limit of turns to do so; the more ambitious the better the reward. Failure earns nothing and loses the entry fee. To get the best treasures and Goth reward, it's best to either choose "defeat the leader" in 1-3 turns or "defeat everyone" in 1-9 turns as victory conditions.

See also Quest Mode/Rewards for requirements and range of prizes.

Some emblems that cannot be obtained in Training Mode can be unlocked here.

It must be noted that battles in Quest Mode have certain rules that make them unlike battles in Story Mode:

No entrance fee means that players short on Goth can earn some freely here. The battle map consists of high movement, low DEF enemies, coupled with the sluggish swamp-type terrain, it's recommended to bring high movement, ranged and spellcaster units.

The best possible victory treasure here are the elemental mails (Nathalork, Peregrine, Phoenix and Leviathan Mail) and elemental bows (Sandstorm, Flame, Tundra and Thunder Bow), which far outclass anything that can be bought in Story Mode at the time this map is unlocked. Unfortunately, sword rewards are lacking, but Volcaetus (spear) can be won here. 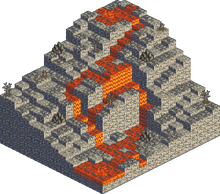 Like Aquila before it, the land is steep and crossed by rivers of lava, so trudging units will have a hard time moving. Humans enemies tend to have low DEF, but monster enemies are tanky enough to pose a problem for battles with the "defeat everyone" victory condition.

The best possible victory treasure here is the Glass Pumpkin, which can be sold in Scabellum's Secret Shop to unlock the Firecrest. Other treasures include Prox (axe), flails (Flame Flail, Hammer of Tears, etc,) and thrusting swords (Needle of Light, Peridot Sword, Dragon Gem Sword). 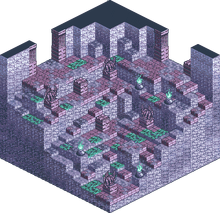 This is the point where Quest Mode starts to get complicated. The player's team starts at the bottom of the map, while the enemy team starts at the top, coupled with the already steep terrain it's suggested to bring flying units, Warp Shoes or the Teleport spell. Most enemies are average for their level, but the Dragon Zombie has Necklace of Resist (making him immune to spells) and Zweig can cast Petrifying Cloud, making both especially troublesome. Rarely, a random knight can have excessive DEF (350+) thanks to his rare equipment, so consider bringing units that can cast Divine Radiance or Petrifying Cloud to eliminate him quickly.

The Necromancy spell can be won as a victory treasure by earning 10,000G (Kill leader, 1-3 turns). This spell allows to transmigrate KO'd allies into Ghosts or zombie dragons. It's necessary to gain some of the most elusive emblems.

The best possible victory treasure here are the Warp Shoes and Warp Ring, which give teleporting-type movement to any unit that equips them. Other treasures include rare katanas (Yomogi-u, Yu-giri) and the Grincer Coat (body armor, part of the Enchanted Hunting Wares set). 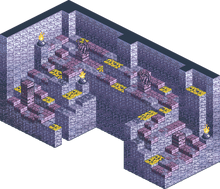 Another steep map; as before, bring flying, warping and Teleport using units. The map is one long thin path with a dangerous abyss in the middle, and each team starts in opposite directions. Byron has average DEF and can be easily killed with two Atropos strikes, although an enemy Priest may complicate matters. Note that a Hawkman with Brionac (may inflict instant death) can appear on this battle, and the Vrtra's -1 Mental Gauge ability can lower skill damage.

There are many great victory treasures to be gained from this map, the greatest being the Lachesis skill, which is a ranged Atropos-like skill for bow wielders; it can only be learned once, but if there are no bow-wielders in the team it can be declined, it will reappear as a victory reward until an unit learns it. Other treasures include rare headgear (Freude Helm, Holy Crown), Reincarnation (item), Dowsing Rod (senses buried treasure), Sacred Stone of Bliss (item, revives an unit once), Balmung (2H sword) and the Sherwood Bow (part of the Enchanted Hunting Wares set).

Do note that only one special skill can be learned per character (ex: If an unit already knows Atropos it won't be able to receive Lachesis). 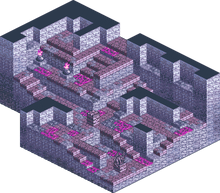 The final battle map, and also the hardest. Dionyde's equipment can boost her defense to 350+, plus she can use Divine Radiance and Heal Plus. Lachesis and Atropos help immensely here, as does Teleport, Time Flux, Fluid Magic and Divine Radiance. Surrounding Dionyde prevents her from healing herself (the AI prioritises not healing the player's units), so focus tactics are recommended. As before, this is a steep, wide map, so bring units with high movement, flyers and warpers. Dionyde will often try to hide in a corner of the map to lessen attack opportunities, so chase her before she gets the chance.

Some impressive equiment can be gained as victory treasures here, including the Oracion (1H sword, the best non-Snapdragon weapon in the game), Saint's Shield (part of the Divine Armaments set), Southern Cross (body armor, part of the Divine Armaments set), Kerykeion (staff) and Brionac (spear, can inflict instant death). Also, clearing the map once gives the final special skill, Clotho; this one is for spear-wielders and does piercing damage two rows in front, making it a good option for units equipping Zephyrus or Longicolnis.

Note: Possibly a bug: Dionyde can attack with a Frozen Axe without having one equipped.

Retrieved from "https://ogrebattlesaga.fandom.com/wiki/Quest_Mode?oldid=22826"
Community content is available under CC-BY-SA unless otherwise noted.