Palatinus is the setting of Ogre Battle 64: Person of Lordly Caliber.

The land that would become Palatinus was originally home to nomadic tribes such as the Aurics and the Indigans, who warred with one another over territory. The Aurics were nearly driven out until The Progenitor obtained the Ultimate Power. With it, he defeated the Indigans and established the Kingdom of Palatinus with the regions of Latium and Capitrium. The descendants of the Progenitor inherited the throne of Palatinus, eventually adding the southern region of Alba and western region of Wentinus to the country.

Eventually, Palatinus was invaded by the Holy Lodis Empire. King Procus Dulmare offered little resistance, having seen what had become of the neighboring kingdom of Nirdam, and surrendered after only a few battles. Due to this, Lodis allowed Procus to keep his title, though he would answer to the Triumvirate assigned by Lodis. What little remained of Nirdam was integrated into Palatinus by being added to Wentinus. The people of Palatinus were forced to convert from Berthism to Lodisism, which was particularly problematic in the Eastern Region.

Years passed and with the populace tired of Procus' submission to Lodis and the oppression of the lower class, revolution began to brew, resulting in a country-wide conflict that eventually involved Lodis and even the Denizens of the Netherworld.

Palatinus is divided into four distinct regions: Latium, Capitrium, Wentinus, and Alba. These are also referred to as the Central, Eastern, Western, and Southern regions respectively. 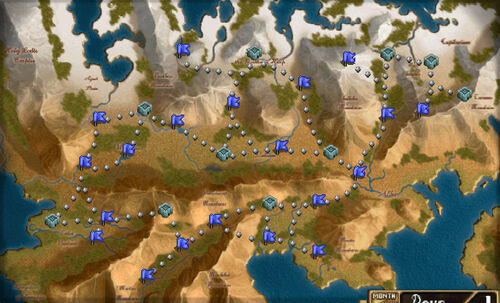 The Central Region of Latium is the most important region of Palatinus. The seat of Latium is at Winnea, the kingdom's capital and home of the royal family. Known in ancient times as the Heartlands, the fertile plains of Latium were the home of the ancient Aurics, from whom the noble families are descended. It stretches from the Aurua Plains to the Gules Hills, and as far north as the wintry lands of Tybell and Argent.

As the political and economic center of the kingdom, Latium is the wealthiest and most prosperous region of Palatinus. The largest proportion of the upper class and nobility live in the Central Region, many of whom hold land and title here.

Capitrium is the Eastern Region of the kingdom that rests among the Tremos Mountains and stretches as far south as the Gules Hills. The capital of Capitrium is in Celesis, which is also the seat of the Eastern Orthodox Church. Because of this, the majority of people of this region are followers of Berthe, the Goddess of Earth, and Capitrium has traditionally been governed by the Archbishop of the church.

The assimilation of Palatinus into the Holy Lodissian Empire resulted in the forced conversion of the populace to Lodisism, a change that was not welcomed by the followers of Berthe. Capitrium experienced a series of small rebellions against the Empire's regime, but were quickly suppressed by King Procus at the command of the Triumvirate. In spite of these events, the Eastern Orthodox Church remains active and Berthanism is still practiced, though on the surface the people of Capitrium are devoted children of Filarhh.

Wentinus is the name given to the Western Region of Palatinus. The region is governed from Castle Talpea near the border shared with the Holy Lodissian Empire. The northern half of Wentinus is covered in fertile plains that are part of the region once known as the Heartlands. These lands are heavily used for agriculture and ranching by the people of Palatinus.

Mount Ithaca originally served as the boundary which divided the Western Region from the Kingdom of Nildahme. The Brigade of the Radiant Cross, however, conquered Nildahme, and soon after the Kingdom of Palatinus submitted to the rule of Lodis. The region was then expanded to incorporate much of the southern and eastern lands of Nildahme. Rich in deposits of Baldur ore, the highlands are mined by Bolmoccan slaves under the supervision of the Western Division. The extracted Baldur is sent to Lodis for use in the making of weapons and armor.

The Southern Region of Alba includes all the lands south of the Batulment Mountains, and can only be accessed by the greater kingdom through the passes at Dardunnelles and Mylesia. To the south of Alba is the Castrato Sea, and to the southwest is Crenel Canyon, the major land route to Xenobia.

Alba was originally an independent land before the Holy Lodissian Empire's invasion of Palatinus. On the order of the Triumvirate, King Procus sent the army here to subjugate the people and incorporate Alba into the kingdom. The southern peoples that inhabited this land were deemed to be of lower class by Lodis and have seen much oppression under the rule of Palatinus. Since joining the kingdom Alba has been governed by the General of the Southern Division, whose seat was at Akka Castle.

Alba is a rugged and barren region, offering little in terms of land suitable for agriculture. The people living here had traditionally existed in a hunter-gatherer lifestyle before their integration into the kingdom. Scattered throughout the region are mines where Baldur and other materials are collected and sent as tribute to Lodis. These mines are operated by forced laborers comprised of the southern natives as well as political dissidents. The harsh lifestyle and poor treatment of the people here contributed to the formation of the Palatinean Revolutionary Army.