Ozma Moh Glacius (also known as Ozma Mow Gracious in the SNES/PS version) is an antagonist character in Tactics Ogre: Let Us Cling Together. She is one of the members of the Dark Knights Loslorien.

While she was only an antagonist in the original version, it's possible to recruit her in the PSP version, but only on the Lawful route, and you'll need the help of a person she believed to be lost to her.

Ozma Moh Glacius. Age 27. A Loslorien commander from Galius, seat of the Holy Lodissian Empire. She is of House Glacius, patrons of the Galius Guild of Magi, and twin sister to the Dark Knight Oz. She wields both spell and blade with equal skill.

She fled from a skirmish with Denam at the Arkhaiopolis of Rhime. It seemed she recognized the blind swordsman who took part in the battle.

She uncovered the lies of the Dark Knight Balxephon after encountering Hobyrim, to whom she was once betrothed. She decided to seek her lost love, and found him in Krysaro. He told her of the truth behind the rebellion in Lodis. She then renounced her allegiance to Lanselot Tartaros and joined the Resistance.

Ozma is a serious and dedicated knight, extremely proud of her noble roots, coming from the esteemed House of Glacius. Like the other members of Loslorien, she holds Valerians in very little regard. However, she does not share her brother's love of torture, and occasionally reigns in his behavior. She is also one of the more level-headed Dark Knights, though not as experienced in politics and intrigue as its more senior members.

Even after renouncing Lanselot Tartaros and defecting to Denam's Order, she remains steadfast in her loyalty to her homeland. She intends to return to Lodis after the war, and help steer her country to a more just path.

First you must have recruited Hobyrim during Chapter 3. At the beginning of Chapter 4, read the Talk topic "A Rift in the Dark Knights" before entering Mount Hedon (a cutscene will be displayed if you did this correctly).

After rescuing Mreuva at Hagia Banhamuba, go to Krysaro with Hobyrim at reasonably high loyalty (above 50). Bring him into the battle against Volaq and Ozma, and when she asks have him tell her that he is indeed Hobyrim. Then you must reduce Ozma to less than 10% HP without killing her and defeat Volaq (or vice-versa), which is no easy task, since the Templars are at a very high level; if she doesn't surrender immediately, keep killing the generic Templars, she should surrender after a few turns.

After the battle, cutscene will show a conversation between Denam, Hobyrim and Ozma. When she tells you that she owes you for her brother's death, respond "As I owe you for my father" to recruit her.

Her late recruitment is quickly forgiven for the sole fact that she's the fastest unit in the game. Not to mention that she's the only playable unit with access to the Knight Commander, an arguably broken class with great stats and a wide variety of skills, support and action abilities that makes it comparable to the Lord class, including access to Double Attack, Intimidate and Ivory Tower.

She joins with high ranks in Augment Ice combined with Attenuate Ice, which makes her really useful for the Temple of Lyuneram during the Apocrypha sidequest.

She also joins with proficiency in 1H Swords and has an unique Whip finisher (Demon Rose) with a 100% chance of Bewitching the enemy.

She excels as either a warrior or a mage, but the second can be considered slightly better thanks to her support and action skills. Also, while she does a bit more damage with 1H Swords, she's the one unit who can deal the most damage with Whips along with her unique finisher, so bear this in mind when choosing weapons.

She can also be reclassed as a White Knight, but changing her his discouraged as her unique class is superior in ability, not to mention that at this point you should already have two (three, if you reclassed Ravness) other White Knights. 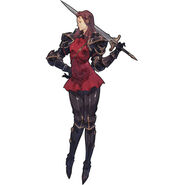