Olivya Phoraena, also known as Sibyl Olivya, is a playable character in Tactics Ogre: Let Us Cling Together.

A sibyl of the Order of Philaha, she first appears during Chapter 4. She's a forgotten childhood friend of Denam's, and helps him discover many things of his and Abuna Prancet's past that were unknown or forgotten.

She has three sisters who are also adepts in magic: Cerya, Cistina and Sherri.

A Bakram who was once a sibyl of the Order of Philaha. She is the daughter of Archiereus Mreuva. After escaping political strife in Heim, she continued to pass on the teachings of the Order with her father. She joined the upper echelons of the Order upon her father's disappearance, and her stoutness of heart garnered much trust from the congregation.

She came upon Abuna Prancet while traveling the Corpsevale on the outskirts of Heim, and took the ailing abuna to Brigantys Castle. When Denam came to the castle she arranged for them to meet, and later told him of his lineage.

She then joined the Resistance in the hopes that it would lead her to her own father.

Of the four Phoraena sisters, Olivya is the most level-headed and even-tempered, possessing a compassionate spirit as befitting of a sibyl. She's also the most religious of the four and continued her father's teachings while her sisters became more involved in the political strife and violent upheavals.

She is particularly close to Denam who she grew up alongside and is close in age to. It's heavily implied that she's been in love with him since childhood.

Available on all routes.

She joins automatically after visiting Brigantys Castle near the beginning of Chapter 4, no matter how you went about it.

Olivya joins as a Cleric, a class she's very good as. However, you may already have several Clerics in you party (and possibly be drowning in them if you are on the Neutral route),

However, like her sisters, Olivya has access to the exclusive Shaman class, lending herself to Water Magic in particular; she can be a great Shaman, though her INT is a bit low and the Water school of magic is arguably the least useful. Despite the setbacks, she still has access to Nature's Touch and Summon magic, giving her high damage potential despite her stats.

Keep in mind that Oracle's Marks are hard to come by, so you might want to wait before reclassing her. You might feel inclined to reclass her sisters first, Cerya and Sherri in particular.

As for recommendations, keep her exclusively as a magic unit. You can make use of her leaned Divine Magic and keep her as a Cleric after recruitment, but if you intend to make her a Shaman then first train her as an Enchantress for the *Meditate skill and later as a Witch to start training attack spells.

Even if you don't plan on using her, she's necessary to recruit Sherri, so there's still something to gain.

See the Cleric and Shaman pages for class specifics. 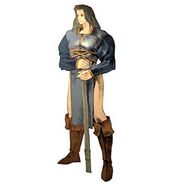 Olivya artwork (SNES/PS ver.)
Add a photo to this gallery

Retrieved from "https://ogrebattlesaga.fandom.com/wiki/Olivya_Phoraena?oldid=22822"
Community content is available under CC-BY-SA unless otherwise noted.