"A gigantic Octopus that is extremely powerful in water, but less effective on land. It's difficult to dodge its 8-legged assault."
— Description 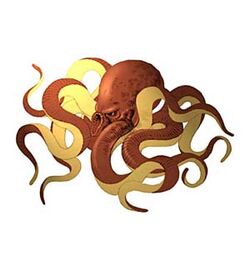 The Octopus is a class in Tactics Ogre: The Knight of Lodis, Ogre Battle: The March of the Black Queen and Tactics Ogre: Let Us Cling Together. Found throughout the seas, the octopus is not only a predator to other sea creatures, but is sometimes used by many of the races of the world.

The Octopus has the appearance of a red octopus, with a yellow underbelly. Boasting the most attacks in the front row in the game and high hit point total, the Octopus makes a formidable front row class in water terrain. However, outside of the water this class suffers from the Slow movement type. At Level 12 with an Ali. of 55+ the Octopus can be promoted into a Kraken.

Retrieved from "https://ogrebattlesaga.fandom.com/wiki/Octopus?oldid=16304"
Community content is available under CC-BY-SA unless otherwise noted.