Diego Galet Azelstan is a playable character added in the PSP version of Tactics Ogre: Let Us Cling Together.

A man well-versed with the ways of the sword and a lover of women and wine, he was once an infamous pirate that plundered the seas of Valeria. He lost his passion after a personal tragedy, and now wastes away in Port Omish.

A legendary Galgastani pirate. In his younger days, he was known to all who sailed the coastal waters of Valeria, and his name struck fear into their hearts. Said to have returned unscathed from the deadly Pirate's Graveyard.

After his daughter was slain in battle, he put his plundering days behind him. He went on to lead a life of debauchery at Port Omish, until the ravages of war compelled him to take up his blade once more.

Recruiting Azelstan, and also unlocking the Buccaneer class, is a long sidequest spanning from early Chapter 4 to early CODA.

The first step is just after meeting Prancet at Brigantys Castle. Before going to Mount Hedon, read "Port Omish, Den of Thieves" in the Talk section of the Warren Report to unlock Port Omish. Go there to trigger a battle where you must keep Azelstan alive; be aware that this battle is considerably hard at the point where it's accesible, so be prepared.

After this continue the story to the point after Hagia Banhamuba but before Barnicia Castle, read "The Pirate's Graveyard" in the Talk section of the Warren Report to unlock the optional dungeon of the same name. Go into the Graveyard, you may finish a battle or just enter and retreat. A new Talk topic will appear in the Warren Report: "The Dread Pirate". Read it and return to Port Omish for an event, then visit Qadriga Fortress.

Finally, continue the story to the point after Barnicia Castle but before Heim Castle, go to Port Omish for another battle to save Azelstan from pirates.

After all of these events, you may visit the Pirate's Graveyard at any point of the remainder of the game or post-game, and fight your way to the "Crystal Halls" area. Azelstan will join you there as a Guest, and if he survives the battle, join you permanently. Note: This event may not appear if the player initiated the Iuria storyline in CODA.

Do note that despite unlocking the Buccaneer class, he doesn't give any Pirate's Marks upon recruitment. To get them, you must either get them as drops from the Archer in the "On Holy Ground" area, or by taking the treasure at the end of the Graveyard. 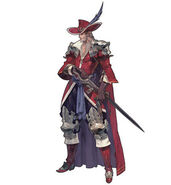