Deneb Rove is a recurring character in the series. She's the governor of Deneb's Garden in Ogre Battle: The March of the Black Queen, and runs a secret item shop in both Tactics Ogre: The Knight of Lodis and Tactics Ogre: Let Us Cling Together (all versions). She also runs the tutorial section in Ogre Battle 64: Person of Lordly Caliber and cameos as a secret character in Legend of Ogre Battle Gaiden: Prince of Zenobia.

Young, beautiful and brilliant, but cold-blooded, Deneb is a witch who is dedicated to her research. She's actually a spirit who inhabits other girls' bodies, though she fiercely denies this.

During the war between the Empire and the Former Xenobian Kingdom, Deneb sided with the Empire in exchange for access to their books of magic which she needed for her research. Deneb governed over the people of the area known as The Garden from Valparin Castle. The experiments she performed were as dark and mysterious as her past and many villagers, all being young men, went missing. When the young men stopped disappearing, villagers started to find entire fields of crops dug up. Whispers started to circulate regarding the nature of her experiments and strange creatures with pumpkins for heads started appearing in the mountains.

When the rebels defeated her army, Deneb flirted with Destin but acknowledged their romance could not be pursued under the current conditions. Deneb was defeated shortly after, and Destin was left with a difficult choice: he could either let her live and suffer the criticism of the people of the region, or end her life himself, which would undoubtedly darken his soul. He came to the conclusion that he should spare her life. This led to some of the people in The Garden to question whether Destin let her live because of her beauty.

Deneb was visited again by Destin and she asked of him a favor: to bring her a Golden Bough from the forests of Diaspola to complete her research on a spell. As a down payment for getting the bough for her, she gave Destin a Black Pearl. When Destin returned, she was given the Golden Bough and in return handed over the Glass Pumpkin, an item that allowed any witch to recruit pumpkinheads. Deneb later joined the rebellion and at the end of the war was placed in the Xenobian Mages Regiment.

Tactics Ogre: Let Us Cling Together[]

Deneb's thirst for arcane knowledge couldn't be fully sated in her new state position. She traveled to Valeria and set up her shop to raise research funds. While she did good business, she tended to burn through money as fast as she could earn it.

To lighten the workload, she endeavored to create pumpkin golems to serve in the shop. She succeeded in making the servants, but they were more rebellious than she planned. Led by a particular golem, Punkin, they started demanding fair wages. When Deneb refused, the golems attempted to rob her, invoking the witch's wrath, and running screaming from the store. Intent on getting paid one way or another, the golems started ransacking the ruins of Vasque like bandits.

Deneb was forced to elicit help from Denam, leader of the Resistance, to try and get the situation back under control. Together, they confronted and defeated Punkin, who had managed to turn herself into a human form identical to her creator. After her defeat, Deneb and Punkin negotiated a deal whereby Punkin could handle the store for a cut of the earnings, giving Deneb the freedom to join the Resistance.

Deneb can be found on the Deneb's Garden stage. To recruit:

Deneb can be found during Chapter 4. To recruit:

Under normal conditions Deneb will join without special equipment or spells, but by fulfilling special conditions she can join with extra levels, an unique setup of a Fire staff, Fire robes and the game-breaking Nova spell.

To do so, go to Hell Gate and fight enemies until you find one holding a Pumpkin (Glass Pumpkin) item, typically a Goblin; no need to persuade them as they will drop the Pumpkins upon death.

Collect at least 10 Pumpkins then go back to Deneb's Shop and sell them to her. This will unlock one recruitable Pumpkin Head per Pumpkin sold from the shop's Recruit option. Hire 10 Pumpkin Heads, do note you don't have to keep them in your army at the same time, recruiting then dismissing them won't subtract from the count.

After these and the recruitment conditions are fulfilled, select "Join" in her shop's menu. Her better setup should be noticeable on her stat page during the recruitment prompt.

There are two possible ways to recruit Deneb.

Tactics Ogre: The Knight of Lodis[]

Unlike other games, here Deneb isn't recruited directly, but rather another unit has to be transformed into Deneb. To recruit:

Once Deneb has been recruited, the player will be able to enter her secret shop in Scabellum.

Deneb becomes recruitable during Chapter 4, and unlike in the original version her conditions now are markedly more time-consuming and taxing. To do so:

Deneb will join as a Witch class unit. But much like in the original version, taking additional steps before starting her sidequest will allow Deneb to join as the unique class Wicce. See page for details.

Deneb can be easily considered the second best mage class in the game, only behind the Princess in terms of raw power and spell repertoire.

Her unique class is similar to the Lich in that it can use all spells from all elements sans Light, and by comparison the Sorceress has better mobility and stat grows. Unfortunately, like the Lich, this class cannot use Dragon magic at all, missing on some of the better spells in the game.

To compensate, should the player recruit her powered-up version, she will come with the game-breaking Nova, a single-target spell which kills the target without accounting for damage calculation. Even if this is too overpowered for the player's tastes, Deneb can easily be the best user of the MagmaGod spell thanks to her stats and elemental affinity.

Tactics Ogre: The Knight of Lodis[]

Upon normal recruitment, Deneb joins as the generic class Witch, though with slightly higher INT and trained levels in Dark and Fire Magic she outclasses most generics.

On the outside this can be a letdown given how tasking it is to recruit her, but Deneb can access two unique classes: Shaman and Wicce. Her trained skills and base stats complement nicely if trained as a Shaman focusing on Fire magic (particularly if the player missed Cerya).

Her real highlight though, is the Wicce class. To get it the player has to sell her 30 Glass Pumpkins before buying all her elemental orbs. This, along with her recruitment quest, is very taxing, though it pays off: As a Wicce, Deneb can be considered the best spellcasting attacker in the game, with excellent stats, unique skills that increase her magic damage, great movepool and attacks that help her amass TP easier than other mages.

Overall, Deneb is a designated magic attacker that overshadows all mage generics and most unique mage characters in the game. 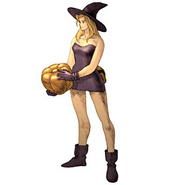 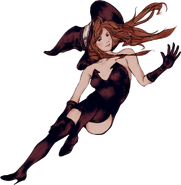 Deneb as seen in the Game Cover of LuCT PSP 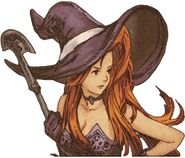 Deneb's portrait in Let Us Cling Together (PSP)