"An evil priest who uses the power gained through their devotions to wield elemental and dark magic. Named both for their appearance and their nature."
— LUCT PSP Class Description 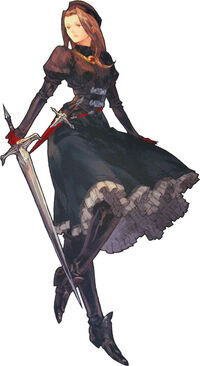 The Dark Priest is a special class featured in the PSP version of Tactics Ogre: Let Us Cling Together. This is one of Catiua's unique classes, representing her corruption and manipulation by the Dark Knights Loslorien. After recruitment, the player can choose between this class or its counterpart the Princess.

Not to be confused with Brantyn Morne's unique class, named Dark Bishop in the SNES/PS version.

The Dark Priest Class is unlocked at the same time Catiua is permanently recruited as Versalia Oberyth during Chapter 4.

Catiua's fate depends heavily on the answers given to Archiereus Mreuva before the Barnicia Castle battles. He asks "Have you the will to wage war upon her?" By answering "That I cannot do," Catiua will appear in the Barnicia Grand Staircase battle, and the order of her recruitment answers is set; by answering "I shall do what I must," and she will not appear in the Barnicia battle, sparing the player the trouble of subduing her non-lethally in battle, and also changing the order of her recruitment answers.

After clearing Barnicia Castle, Denam will have a conversation with Catiua inside an isolated room. If the answer to Mreuva's inquiry was "That I cannot do", the correct answers here are "I did only what I had to do" and "You are my sister, and I love you." If the answer to Mreuva's inquiry was "I shall do what I must" instead, the correct answers are "I never abandoned you" and "I took no joy in our parting." If done correctly, she will join after the player returns to Phidoch Castle.

This class has the dubious honor of having the second-highest INT score of all classes (behind the Lich), but also a restrictive skillset that puts it behind any other of the special mage classes.

Similar to the Valkyrie, the Dark Priest has access to all elemental magic, but to such a limited degree that it makes the effort of getting an elemental skillset pointless, despite access to Apocrypha. Dark Magic is more varied, with spells like Drain, Spellcharge and Charm being especially effective, but it also suffers from considerable limitations, such as the absence of Paradigm Shift. However, it should be noted that despite the reduced INT and RT scores, both the Lich and (to a lesser extent) Necromancer classes make for better Dark Mages due to wider skillpool and equipment choices.

Their unique action skills, too, suffer from being technically good but terrible in practice: Bloody Gag (attempts to inflict 'Sleep' and 'Silence' on a target) and Iron Maiden (attempts to inflict 'Wither' and 'Poison' on a target) cost a hefty 50 TP per casting, have poor accuracy, and have a range of 1, which make it dangerous to use due to the Dark Priest's poor defense. They can also transfer Meditate* from the Enchantress, which may be the best TP investment possible for this class.

Speaking of transferring skills, their best possible equipment, the Spellbook, has to be transferred as a weapon skill from the Witch class.

Overall this class may not be bad by itself, but being overshadowed at almost everything by other mage classes, plus the extremely tedious Classmark locations, make it more trouble than it's worth. Catiua's other two unique classes, Princess and Priest, are much better in terms of utility. Still, the player may feel inclined to try this class for the unique sprite and unusual movepool.

*Asterisk signifies it must be taught from another class.

Retrieved from "https://ogrebattlesaga.fandom.com/wiki/Dark_Priest?oldid=22439"
Community content is available under CC-BY-SA unless otherwise noted.