"A pirate plying the Obero Sea, only those unaffiliated with any groups or orders are called by the name buccaneer."
— LUCT PSP Class Description 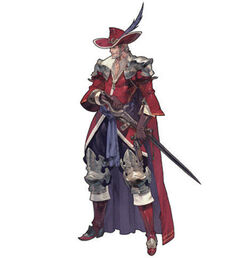 The Buccaneer is a special class featured in the PSP version of Tactics Ogre: Let Us Cling Together. It's represented by Diego Galet Azelstan, but can also be used by Denam Morne, Canopus Wolph and Vyce Bozeck.

This class is unlocked at the same time Azelstan is recruited at the end of his questiline, which starts by early Chapter 4.

The first step is just after meeting Prancet at Brigantys Castle. Before going to Mount Hedon, read "Port Omish, Den of Thieves" in the Talk section of the Warren Report to unlock Port Omish. Go there to trigger a battle where you must keep Azelstan alive; be aware that this battle is considerably hard at the point where it's accesible, so be prepared.

After this continue the story to the point after Hagia Banhamuba but before Barnicia Castle, read "The Pirate's Graveyard" in the Talk section of the Warren Report to unlock the optional dungeon of the same name. Go into the Graveyard, you may finish a battle or just enter and retreat. A new Talk topic will appear in the Warren Report: "The Dread Pirate". Read it and return to Port Omish for an event, then visit Qadriga Fortress.

Finally, continue the story to the point after Barnicia Castle but before Heim Castle, go to Port Omish for another battle to save Azelstan from pirates.

After all of these events, you may visit the Pirate's Graveyard at any point of the remainder of the game or post-game, and fight your way to the "Crystal Halls" area. Azelstan will join you there as a Guest, and if he survives the battle, join you permanently. Note: This event may not appear if the player initiated the Iuria storyline in CODA.

Do note that despite unlocking the Buccaneer class, he doesn't give any Pirate's Marks upon recruitment. To get them, you must either get them as drops from the Archer in the "On Holy Ground" area, or by taking the treasure at the end of the Graveyard.

Retrieved from "https://ogrebattlesaga.fandom.com/wiki/Buccaneer?oldid=22430"
Community content is available under CC-BY-SA unless otherwise noted.