"Basic female class wielding bow and arrows, having gained enough experience to fight on her own."
— Description 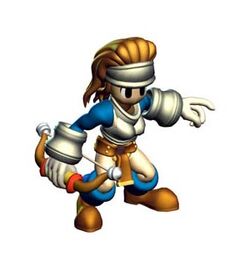 The Amazon is a class in Ogre Battle: The March of the Black Queen, and Ogre Battle 64: Person of Lordly Caliber. Women warriors from the forests, the Amazons are more apt with bows than with melee weaponry.

Amazons are also the base female class in the SNES/PSX version of Tactics Ogre: Let Us Cling Together. For the PSP version, it was merged with the male Soldier into the Warrior class.

The Amazon has the appearance of a blonde, lightly armored women with a bow. They are the base class for all Human female characters.

Bow-wielding females, Amazons are one of the two most basic classes in Person of Lordly Caliber, alongside their male counterpart, Fighters. The number of Amazons obtained at the beginning of the game is determined by the answer given to the questions asked at the beginning of the game. Despite this, Magnus Gallant's unit starts with two Amazons, Dio's unit starts with one, and Leia's unit starts with two at or near the game's beginning by default. Amazons are recruited when a female unit leader wins several battles and has at least one cluster of Soldiers in her unit. If the leader of the unit is a male, he can only produce Amazons if he is carrying the Ansate Cross. Other than these two methods, Amazons can only be recruited by using a Love and Peace item on an enemy unit with at least one Amazon.

As with other classes, Amazons cannot be set as unit leaders. By default, Amazons wield a Short Bow, Leather Armor, and a Bandana. If their weapon is changed, it appears uniquely on the character's in-battle sprite.

One Amazon appears at the graduation ceremony at Akka Castle, during the game's Prologue, and her name is Alex. Other than this, Amazons are always randomly named. During the second raid on Volmus Mine, where Magnus flees with a rebel unit, Dio stays behind to battle Rhade with two Amazons.

Amazons typically belong in the back row because of their low resistances and the ability to fire two arrows instead of one in the first row. They can be directly promoted to four classes.

The Amazon is the initial class for female units. Like their counterpart the Soldier, the Amazon doesn't excel at anything in particular and their stat growths are balanced in all areas for the purpose of reclassing into a basic specialized class as soon as possible. Players are thus advised to use this class only until new classes open up, and not longer, as the lack of stat branching and the Amazon's inherent blandness will only serve to make the unit lag behind all others even before Chapter 1 ends.

The Amazon is near identical to how it appears in The March of the Black Queen, with only a minor difference in state growth, and the extra promotion class of Enigma Hunter (requires a Silver Cross item).