"I came to avenge my mother, and everyone else on this island."
— Aisha Knudel

Aisha Knudel is a playable character in Ogre Battle: The March of the Black Queen and Ogre Battle 64: Person of Lordly Caliber. A cleric of Roshfel, she returns to her home of Island Avalon upon hearing the news that Prince Gares has executed her mother, Foris.

Aisha was born on the island of Avalon, the center of the Roshfel religion. At the age of sixteen, like all girls aspiring to become a monk of Roshfel, she went traveling on a journey of training.

She returned two years later to find the island of her homeland under occupation by the Empire. Learning that her mother was executed by Gares as an example of how the Empire dealt with noncompliance, Aisha joined the Xenobian Rebellion to avenge her mother's death. She defeated Gares at Amad but his spirit lingered on.

Aisha confronted Gares again in the ruined temple of Shalina where he was finally destroyed, thereby fulfilling her vow to her mother and people. During the celebration at Xenobia Castle she left quietly with Destin, Quass, Saradin and Gilbald on a mission to the north in an effort to stymie the invasion plans of The Holy Lodissian Empire. 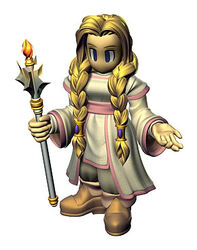 After the events of Ogre Battle: The March of the Black Queen Aisha traveled to the Xenobian Border to assist the refugees crossing the border into Xenobia. During the battle on the Xenobian Border between Debonair and a Southern Division soldier Magnus Gallant, she called for Debonair's retreat. Later on, although not wearing her traditional robes and braids, Aisha made an appearance in Volmus Mine, helping the rioters flee the wrath of Eurynome Rhade, where she is simply referred to as the "Maiden."

At Audvera Heights Aisha joined the Blue Knights in the town of Puld, if Magnus interfered with the failed execution of Frederick Raskin. It is at the time of her recruitment that Magnus learned that she was one of the members that prevented Raskin's execution and led him to safety.

Aisha can be found on the Island Avalon stage. To recruit:

Retrieved from "https://ogrebattlesaga.fandom.com/wiki/Aisha_Knudel?oldid=19113"
Community content is available under CC-BY-SA unless otherwise noted.